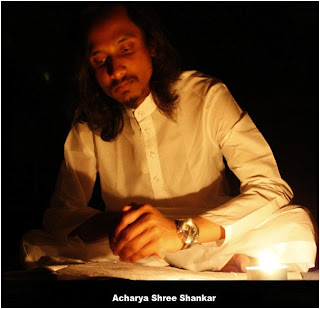 
After conducting retreats in Greece, France & Italy, Enlightened Spiritual Master Acharya Shree Shankar is now coming to Denmark. Acharya Shree Shankar comes from the same family tree of 9th Century Advaitha Guru Sri Adi Shankaracharya. Its a great opportunity to be with him in this meditation retreat. He is conducting 3 days intense meditation camp and also Satsangs in the evening on several topics of Human Consciousness. 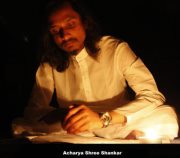 V.Guru Prasad Sharma, now well known as Acharya Shree Shankar, Mystic Philosopher & Spiritual Master was born on 14th November 1986 in Bangalore City of India in a Hindu Priest Family. He was a Gifted Child who had interest in Holy Scriptures at the Young Age of 8. He was a meditative person from the very young age of 5 & also was testing new meditation techniques from childhood. His Upanayana (Thread Ceremony Ritual) took place at the age of 8 and continued his Vedic studies under his grandfather. It was when he was 12 years old & met with a serious accident in which he was the lone survivor in the accident changed his life for the first time. This changed his way of life as he was disappointed of losing so many of his close friends in the school & started questioning people on death & birth. He started rebelling & questioning scriptural meaning of life which lead to his first step of being a Public Speaker.
He won First Prize at State Level Debate Competition on Philosophy at the age of 17. He lost his sibling at the age of 18 & this intensified his reasoning of Cycles of Birth & Death, God, Soul & many questions. He joined prestigious M.S.Ramaiah College of Engineering & in between he left for Himalayas to find the eternal truth. There he stayed in Rishikesh (Foot Hills of Himalayas) & met many yogis which lead to make his journey simpler. He then spent 3 years in the mountain alone performing Shambhavi Mudra Dhyana. He attained Enlightenment on 30th October 2009. He returned back to Bangalore City & held his first public “Chakra Mudra Meditation” & “Kundalini Meditation” for people. He introduced new meditation techniques including the “Emotion Therapies” & also “AUM Meditation”. Traveled to 45 cities in India conducting meditation camps & also public discourses. He also visited Greece, France & Italy to conduct Meditation Camps and Seminars. Now he conducts camps in several cities & delivers public discourses on almost all the subjects of Human Consciousness & best known for his New Meditative Techniques.
You can reach "Acharya Shree Shankar"
Email :vgp8888@gmail.com
Phone:0091-9901359918
Posted by Acharya Shree Shankar at 10:04 No comments: